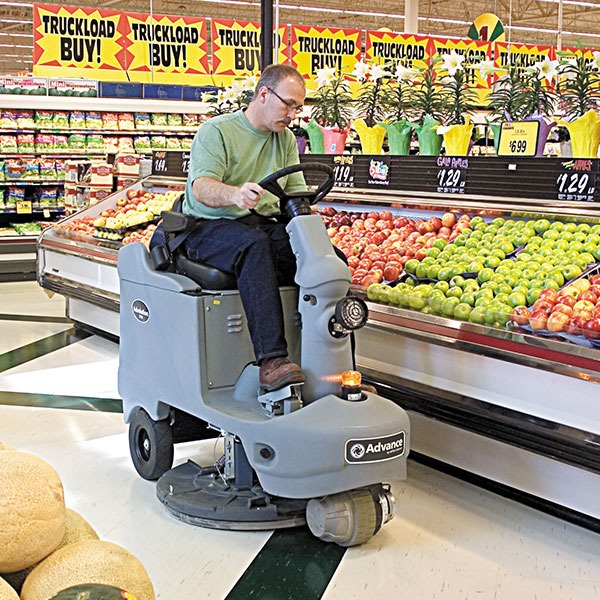 New commercial and industrial floor cleaning equipment can be a big investment. You need a partner you can trust. Advance offers:

We develop innovative commercial and industrial floor cleaning solutions that will reduce the total costs of your floor cleaning operation. We focus on developing and manufacturing products that:

Take Advantage of the Latest Technology

We continue to be an industry leader in developing state-of-the-art floor cleaning technology and producing innovative industrial and commercial floor cleaning equipment that is effective, efficient, and sustainable.

Partner With a Company You Trust

Our experienced engineers are committed to understanding your unique situation and developing products that solve every floor cleaning application. Our extensive local dealer network delivers top-notch service, will help you find the perfect machine for your application, and will share their expertise in everything from cleaning program analysis to guidance on meeting the most challenging floor cleaning requirements.

For over one hundred years, Advance has delivered top quality commercial and industrial floor cleaning equipment and responded to the changing needs of our customers and markets with innovative solutions. We merged with Danish company Nilfisk in 1994 to expand our global reach and continue offering the most innovative products on the market.

1910
Merritt Pond started the Advance Machine Shop, repairing equipment for the grain milling industry in Minneapolis, Minnesota. The original site was a small wooden building with a dirt floor located at 2613 Southeast Fourth Street, not far from the mills.

1922
The shop began repairing terrazzo grinding machines for the terrazzo floor industry. Pond realized that for the Advance Machine Shop to grow, it would need to manufacture a product to sell.

1924
Advance’s first product, a terrazzo grinder, was demonstrated to contractors throughout the United States.

1930
Advance began making the “new” Lowboy™ floor machines (called Lowboy because they could reach under desks and furniture). By then Advance terrazzo machines were the standard in the industry, and the business was well enough established to survive the Great Depression.

1941
Advance focuses its efforts on helping the American cause in World War II by making parts for B-17 bombsights.

1955
Several other new Advance products emerged, including the Gyro™ and Pacemaker™ (both floor scrubbers), and Hydro-Vac™ (a wet/dry tank vacuum). Later the same year, Advance moved into a 10,000 square foot building on Washington Avenue in Minneapolis while retaining the original location on Southeast Fourth Street.

1956
The first Advance national sales meeting was held at the Washington Avenue location. There were eight salesmen and less than forty distributors nationwide.

1958
The factory employed forty people and needed room to grow. The Company bought a 105,000 square foot building located in Spring Park, not far from Minneapolis. Factory and headquarter offices remained in Spring Park for almost 30 years.

1964
The CarpeTwin™ became the first two-motor carpet vacuum on the market.

1966
International operations began with Advance exporting machines throughout the world.

1974
The Industrial Division was established. The manufacturing and sale of an industrial line, including large, heavy-duty rider sweepers and scrubbers, presented a new growth opportunity for the company.

1976
An international office was established in Luxembourg.

1978
The Spring Park plant was expanded to 250,000 square feet, and a 200,000 square foot assembly operation and distribution center was added in Plymouth, another suburb of Minneapolis.

1985
The international facility moved from Luxembourg to the United Kingdom with the establishment of a 35,000 square foot manufacturing plant and office in Cardiff, Wales. A warehouse/office was set up in Monheim, Germany the same year.

1989
From its beginning, Advance Machine Company had been a family-owned organization under the management of Merritt Pond, his son Harold, and finally Harold’s son Robert. In January of 1989, Advance was sold to a group of financial investors.

1999
The Hydro-Retriever™ 2800 Rider Scrubber was introduced.

2001
On November 1, a truck left our dock loaded with cleaning equipment headed for the great city of New York. The final destination was Capital Supply (a longtime Advance Dealer) who volunteered to help us deliver these products to six schools at “ground-zero” for much needed cleaning. These six schools are part of the New York Board of Education. Once the schools were thoroughly cleaned, the equipment was sold and 100% of the sale proceeds were donated to the American Red Cross on behalf of Advance and Capital Supply.

2004
Nilfisk-Advance, Inc. announces the acquisition of ECOLOGICA, a top manufacturer of quality industrial and outdoor sweepers, located in Parma, Italy. Nilfisk also acquires the ALTO group, which was formed six years earlier by merging 10 global brands within the cleaning industry, including Wap and Clarke.

2007
Acquisition of Viper, a leading Chinese manufacturer and supplier of professional cleaning equipment to the mid-market.

2016
Nilfisk announces The Horizon Program and showcases the first prototype of a new and ground-breaking autonomous scrubber to enable unmanned cleaning.

2017
NKT A/S is split into two individual companies, and Nilfisk is listed as an independent company on the Copenhagen Stock Exchange (Nasdaq Copenhagen).

How can we help you?

Nilfisk is one of the world's leading manufacturers of professional cleaning equipment.